How many times have you heard it stated that ‘Simi Valley’ means ‘windy valley’ or ‘valley of the winds?’  John Peabody Harrington, who was a linguist, ethnologist, and a specialist in the native peoples of California, had a different definition.  In a 1969 newspaper column, his brother Robert E. Harrington who was a Simi resident, author, and journalist wrote: “The word Simiji in Indian meant the little white wind clouds so often seen when the wind blows up here and Indians living on the coast, as most of them did, would never venture up here when those wind clouds were in the sky…There are other explanations about the name Simi, but this one was given to me by my brother who worked over 40 years for the Smithsonian Institute…”

So…Simi doesn’t mean wind, but it does have something to do with wind.  And we do have winds!  What we now call the Santa Ana winds, the old timers called the ‘East Wind.’ Eventually the early pioneers would plant eucalyptus windbreaks, but those winds could make life difficult in the sparsely populated valley.

The way of the Pioneers was hard. Many came and went.  The East Wind blew harder in those days.” Pat: I remember Lou Wright telling about those winds.  They usually lasted three days. They would cover their furniture with sheets.  When it was all over, they began their housecleaning with a shovel.

“Lou said she asked her husband why so many stayed.  He said they were all too poor to leave. But the old pioneers have happy memories. They have seen our valley grow. They love it. To them, it is the most beautiful spot on earth.”  Here is a poem written by old-timer Sadie Gould:

THE VALLEY OF SIMI

There’s a blue sky the whole world over

But somehow it seems to me,

The blue is a little deeper

Over the Valley of Simi.

Where ever it may be,

But the gold is a wee bit brighter

Over the Valley of Simi.

Though I may wander far sometimes

My heart shall ever be,

A captive in this magic vale

The Valley of Simi.

Pat’s comment: I am always glad when I hear current residents who feel that same way today. 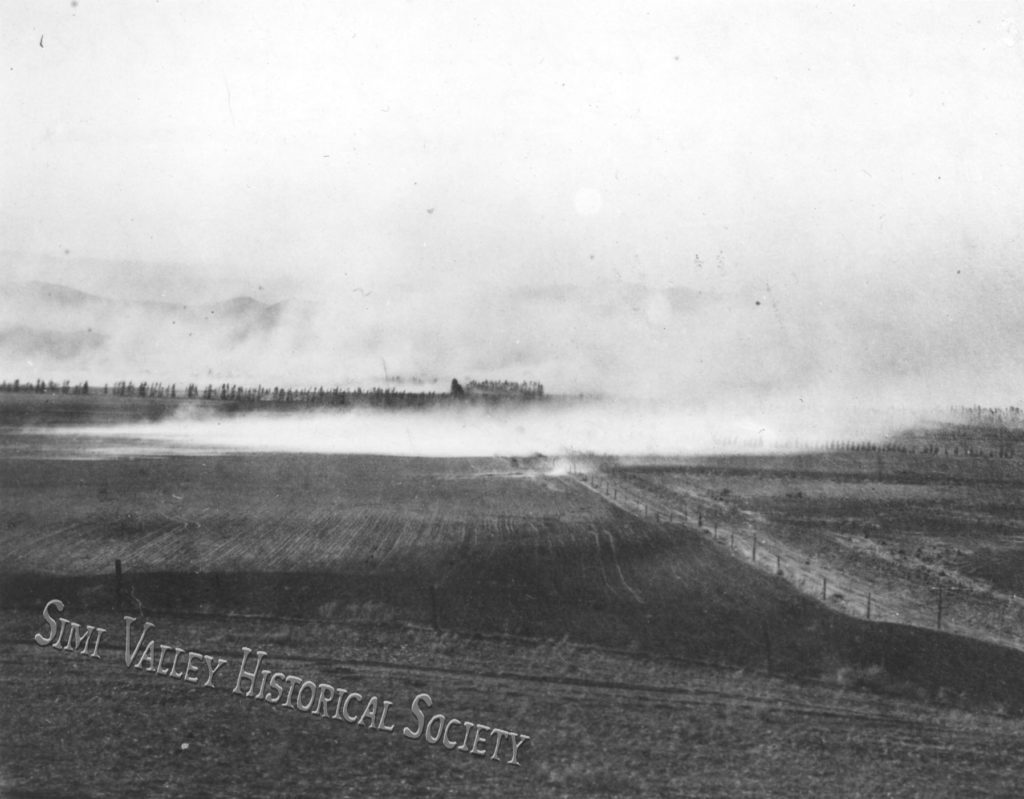 East wind on Tapo Road Taken from R.R. crossing at Santa Susana about 1909